News about and from Flowee

Just before our Christmas holidays, we are happy to announce for immediate release a new beta release of Flowee Pay for Android. Venturing into Android is an interesting trip, last beta was quite successful in that we received a lot of very valuable bugreports and happy “it just works” reports.

Flowee Pay is moving on to Android! When Flowee Pay was first started, already 2 years ago, the dream was not a small one. A truly cross-platform payment solution and wallet. The idea was born out of the frustration that so often wallets only function because of some beefy server doing all the hard work.

When Bitcoin was first introduced, a little over 14 years ago, it caused quite a stir. More importantly, it caused a lot of people to look at the ideas behind money and finance from a new perspective. Money is very simple, a token given in exchange for something of value.

There are several really cool ideas from decade-old discussions on Bitcoin which have not lost their power and deserve to get attention every now and then to see if someone is willing to make an actual product out of them.

The Chinese proverb “May you live in interesting times” has always been said to be a blessing and a curse in equal measures. Honestly, for most of my life this idea did not really mean much to me and I simply acknowledge that I’ve heard this one before.

hey guys, just wanted to add some details around the actual state of the zero-conf transaction security right now on the Bitcoin Cash chain as this is pretty exciting and I feel its in need of more attention. For those that are just tuning in, zero-conf transactions are the ones that have not been put in a block yet and double spending is absolutely solved by a transaction being mined.

Running the backbone of modern crypto systems, like Bitcoin Cash, are so called “full nodes”. They earn that name by being able to download the raw transaction blocks and validating them to comply with hundreds of rules. They end up with a current state UTXO database.

The Flowee project has made available for immediate release the version 2021.03.1 of their tier-1 applications and services. We advice anyone to upgrade to this version for best performance and compatibility. In this 3rd major release this year Flowee adds a list of new networking APIs, more features are added in the REST service and we added a per-block index in the Hub.

At the edge of our new year, there are too many people looking back, which for 2020 is a tad depressing. So instead I’m going to do a forward-looking post. I’m an infrastructure person, I worked for years in a company that has as its sole product libraries and programming interfaces.

A story written by reddit user jessquit made me wonder, how crazy is it to think that VISA’s world wide usage would be able to move to Bitcoin Cash? Jessquit writes: According to Visa, they process about 150M txns per pay (1700 tps).

I’ve been testing and improving scaling on Bitcoin Cash since 2016, as we have been focusing on other topics for a while there has not been a whole lot visible progress, and with this post I want to rectify that.

Several years ago I invented an exciting concept of a Double Spend Proof. To understand what it is, let’s first figure out what a double spend is. When I use Bitcoin Cash and I pay someone, I spend a coin, a coin is just a digital file and it is easy to copy.

Hello dear Bitcoin Cashers. People are again focusing on building a good money and this has led to a big milestone approaching for Double Spend Proofs (DSPs). I want to share an update on the progress of double spend proofs and look forward in this longer journey and provide a mini roadmap for people to understand what is next.

About a year ago discussions started around the Bitcoin Cash DAA (Difficulty Adjustment Algorithm). It was getting clear that there were problems, but frankly only a small number of people looked close enough to know about the malfunction at all. 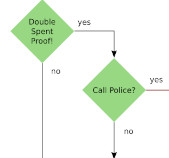 A double spend attack is where a person tries to steal from another person or merchant by creating two transactions, one that pays himself and the other that pays the merchant. The idea is that the attacker makes the merchant see the one for him and then tries to get the transaction paying him to be mined.

In Bitcoin there is a concept called “Child Pays for Parent” (CPfP). It allows transactions that may be stuck to get “un-stuck” in a simple manner. (background) In the Bitcoin Cash case the usage of this method is much less needed than on a saturated chain where the queue is perpetually full.

This release adds some 80 commits, with git stats of 95 files changed, 6167 insertions and 529 deletions. More importantly, this release adds a new library to Flowee that is focused on the peer-2-peer protocol and implements all the basics any app would need to be an SPV (Simplified Payment Verification (8)) client, such as a wallet.

As the focus for Bitcoin Cash protocol development is shifting to the November upgrade we should look at the difficulty adjustment algorithm (DAA). The current DAA, that doesn’t work so well, is a simple filter and it has been suggested by various people that an exponential decay filter would work better.

Last week I introduced the world to a new library called P2PNet. A C++ library that allows developers to build a wide range of Bitcoin Cash related applications. Working with a work-in-progress wallet quickly made me realize that the Bitcoin network is full of nodes that are not actually following the Bitcoin Cash chain.

st couple of weeks I’ve worked on a new library for Flowee. The library is called ‘P2PNet’ and has been pushed to the project git yesterday. The purpose of this library is to provide programmers with a very simple way for their programs to become part of the network of Bitcoin Cash, speaking the peer-to-peer (P2P) protocol.

In defense of freedom software in Bitcoin Cash

Introduction Last weekend now defunct project ABC put up a press release that explained how they decided to whitelist their friends’ projects. One of the rules was quite specific in excluding exactly one project, another was written specifically to exclude exactly one other project.

Double Spend Proofs: What they are and how they work.

Introduction In my youth I read a the wonderful story about a car manufacturer that made a very fancy car which had superb traction and when you went through a corner you would not feel any vibration or other problems while steering it through even the most sharp corners.

Mythbusting: Bitcoin (on its own) cannot scale.

This myth is very stubborn in being squashed. For years have we seen people give numbers, show results and do design improvements that clearly gives the indication that Bitcoin can scale on-chain. Mostly with bigger blocks. Yet, there is still a myth that this is impossible.

Mythbusting: We need a developer-fund

This myth has been going around the crypto sphere for some time. Competing coin Dash has a system where funds are continuously generated that pay for further development. They have the ‘developer fund’ built in. Most people propping up this myth are not so blatant as Dash, but the concepts are always similar that either some social pressure or maybe a forced method there will be funds routed towards development.

There are still a lot of misconceptions out about SPV wallets, people make it seem like they are less useful than they are, and this is a shame. SPV wallets are wallets with “Simplified Payment Verification”. A term that actually shows up in the original Bitcoin whitepaper from Satoshi Nakamoto.

I’ve been working in Bitcoin for quite some time now, with my first commit some 5½ years ago. After Gavin Andresen stepped down from Classic, and Bitcoin in general, I became the maintainer there. And a little over a year ago I started focusing on my own vision of what a so called “full node” should be.